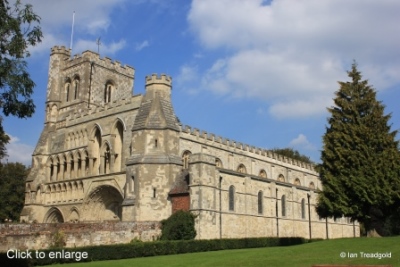 The priory church of St Peter in Dunstable is situated on the south side of Church Street to the east of the main crossroads in Dunstable between the A5, A505 and B489. The church is situated in the public Priory Gardens covering much of the site of the Dunstable Priory.

Suffice it to say that the church in its present form is a shadow of what could have been if the original structures had remained and not been destroyed or allowed to fall into ruin following the dissolution of the monasteries by Henry VIII.

If things had turned out differently in the C16, Dunstable could now be home to one of the great English cathedrals. The present church evolved from the original nave and the central tower, crossing, transepts and original chancel were all lost.

The building that remains consists of large nave and chancel with aisles to the north and south with an impressive west end and tower to the north-west. The east end shows the scars of the history of the building the most. 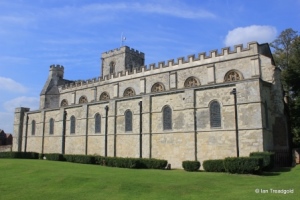 Much of the external walls, apart from the west front dates from Victorian restorations or later. The south wall is of those restorations and contains seven single-light windows all under Romanesque arches. 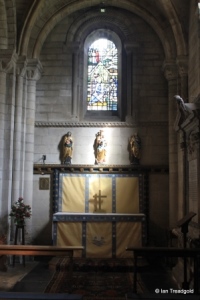 Inside, these clerestory windows have wider Norman arches to match those of the nave bays below forming quite large and unusual openings for the clerestory. 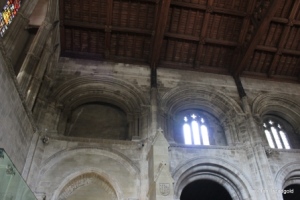 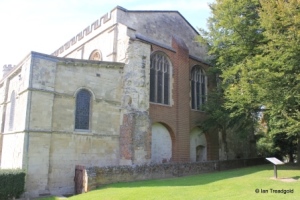 The east end of the church marks the end of the original nave and was the site of the crossing, tower and north and south transepts with the original chancel extending beyond.

The windows above are modern three-light windows under flattened cinquefoils. The tracery above is in the perpendicular style with trefoil designs under a segmental arch. 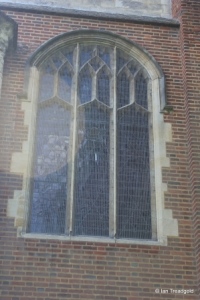 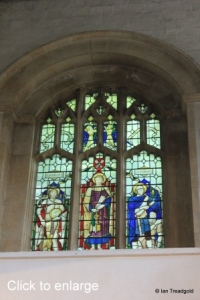 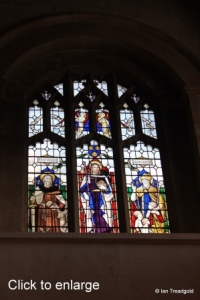 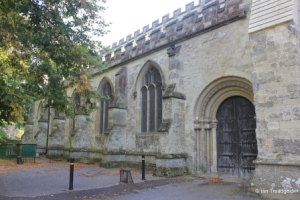 The north side of the church holds five windows, all three-light cinquefoiled windows with trefoiled perpendicular tracery above under pointed arches.

The north doorway was originally protected with a porch, now long gone.

The archwork is much restored with an decorative crenelated motif running round the Romanesque arch. 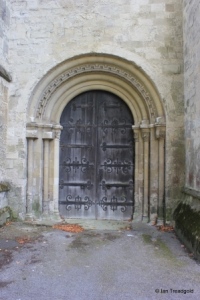 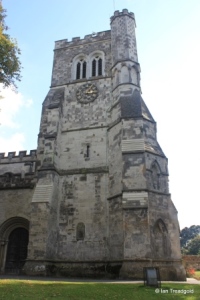 The north-west tower is of four stages dating from C15 unusually built onto the end of the north aisle so as not to mask the glory of the west end.

The tower is heavily buttressed, that in the north-west corner supporting an octagonal stair turret. 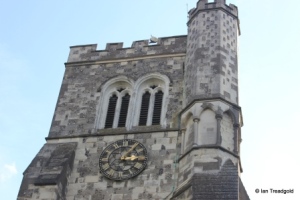 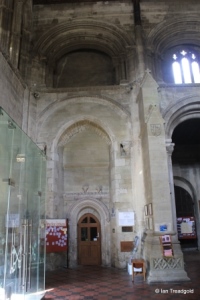 The belfry level has two two-light trefoiled openings under three-centred arches on three sides with that to the south just having a single opening.

This upper level has chequers of flint and chalk providing a decorative effect. The clock has just a face to the north.

Inside it is clear that the tower was added on top of the existing aisle with the last bay being heavily reinforced and buttressed internally to support the tower above.

The west front is the most extravagant of any church in the county but also perhaps the most confusing containing a mixture of styles and effects.

The front and the two original towers to the north and south were damaged in a storm in 1222. Whilst there were plans to rebuild both towers, only the north tower was ever built and the south side just has a large buttress containing a stair turret. 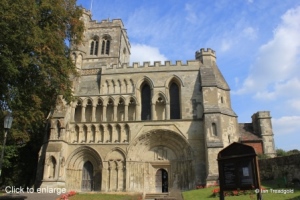 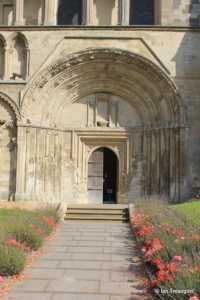 The main entrance through the west front leads into the nave and is through a Norman arch with several tiers of mouldings decorated with foliage motifs.

The doorway itself is quite small in comparison with the arch and fitted into a square head with quatrefoil designs in the spandrels.

Above the doorway labels are three statue niches. 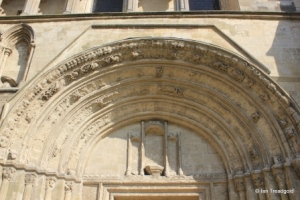 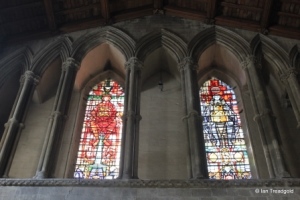 Above the doorway are two lancet windows containing modern glass. Between these two lancets is a pointed statue niche on the west front gallery. This arch is larger than those over the north side of the front but is of a similar design. 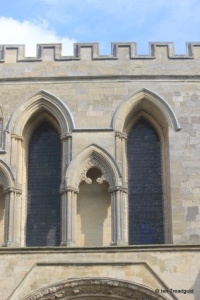 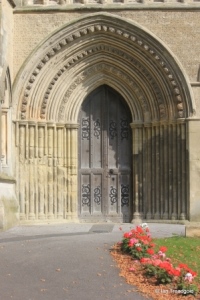 The northern or left side of the west front has an Early English doorway deeply moulded with foliage motifs. 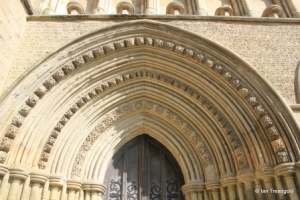 Between this arch and the main doorway is a curious blocked arch with different styles of motifs in the moulding on the left and right sides.

Inside this arch is some decoration of intersecting Norman arches of a design that does not quite fit the arch itself. 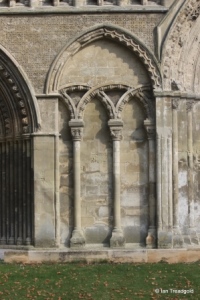 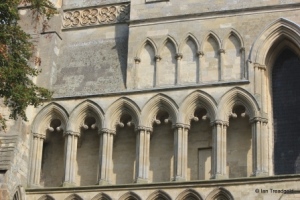 Above these two arches are a range of seven empty statue niches with pedestals. Above are six larger trefoiled niches to match the larger niche to the right that has already been mentioned.

Above again is a range of five further smaller niches. Whilst impressive, the front would have been even more so if the medieval architects and masons could have come up with a more symmetrical design.

The east end of the chancel shows the blocked doorways between the two parts of the church to the sides of the altar.

Above the altar are the two modern windows and the centre piece is a set of three gilded and painted statues under a tall spired canopy. 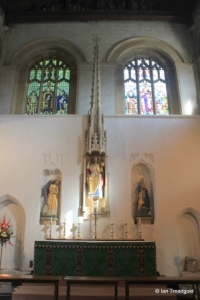 Many of the windows of the church have modern stained glass much of it dating from the 1970's and 80's designed by John Hayward. 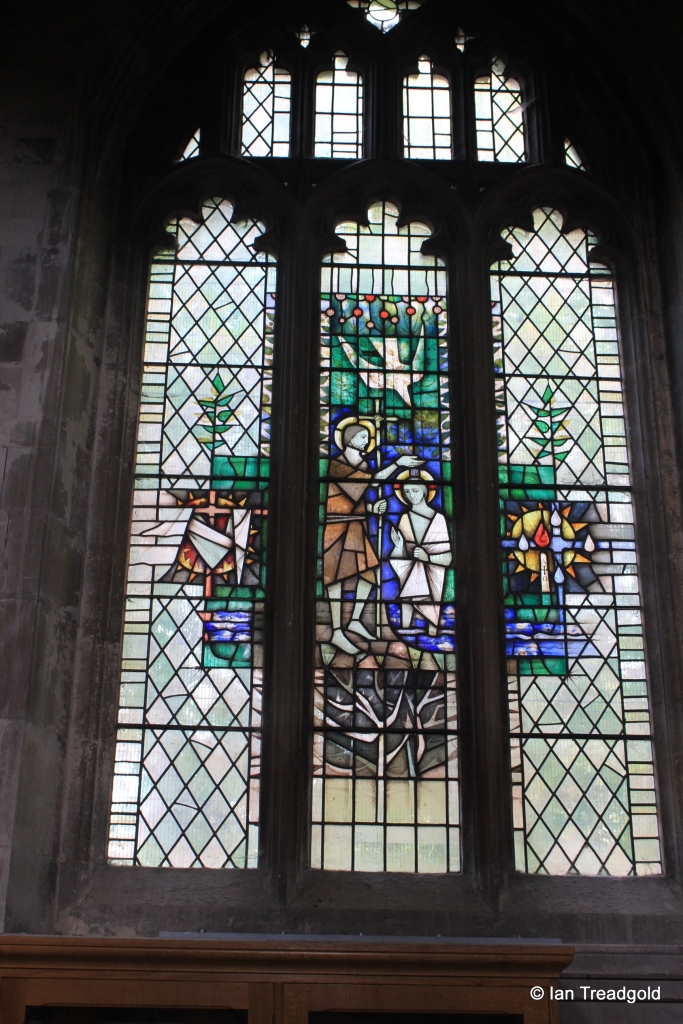 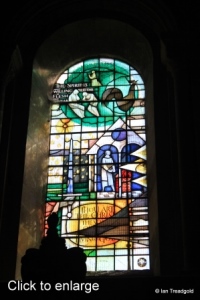 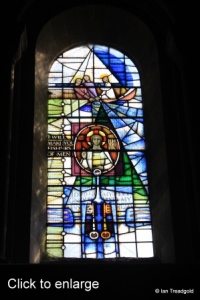 The north aisle contains a window dedicated to the patron saint of the church, St Peter. 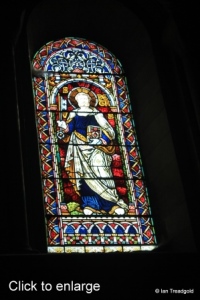