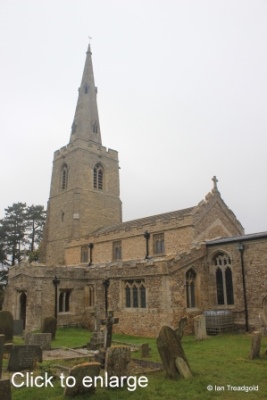 The church of All Saints in Little Staughton dates from C13 and was originally dedicated to St Margaret. Having changed the name of the church in C19 the link to the original name was restored with a chapel dedicated to St Margaret in 1937. Situated on the eastern fringes of Bedfordshire and to the east of the village of Little Staughton, the church is at the end of Church Lane with parking available outside the church.

The church consists of a nave and chancel, south aisle, south porch, west tower and steeple and a small organ chamber to the north of the chancel. The chancel is approximately 33 feet by 18 with the nave adding 40 feet with a width of 18 feet. The south aisle adds a further 10 feet in width. The tower and steeple are around 11 feet square and some 60 feet in height.

The present church developed from an aisleless nave and chancel built in C13. The south aisle and chapel were added in C14 with the chancel being rebuilt and the clerestory and tower being added in C15. The spire was struck by lightning in June 1900 and was originally rebuilt with a capped spire with the work completed in 1901. A hailstorm in 1906 caused damage to the west end of the church. The spire was restored to its present glory in 1910 and the organ chamber completed in 1925. 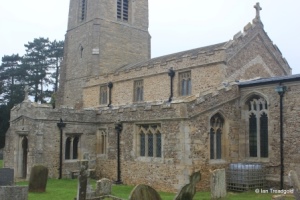 The south aisle has windows to the east and west along with three windows on the south side. The clerestory above shows signs of recent restoration and contains three two-light square headed windows on each side. The nave, aisle and porch are embattled and the roof line shows clearly the difference in height of the present roof of the chancel to its precursor. 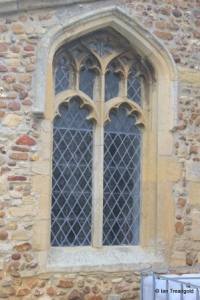 The windows to the east of the porch are both square headed and are of two and three trefoiled lights. 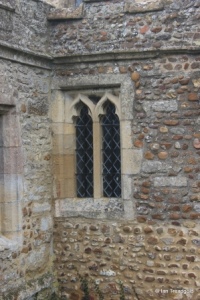 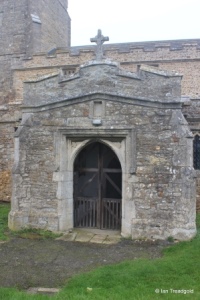 The porch is quite long with windows to east and west of two cinquefoiled lights under square heads. The outer doorway has carved spandrels with a small statue niche above. 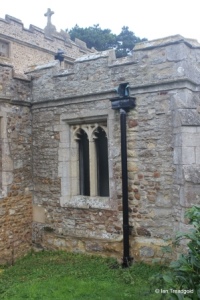 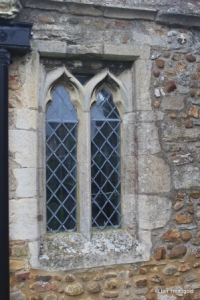 The western window is identical to the window on the other side of the porch with two-lights under a square head. 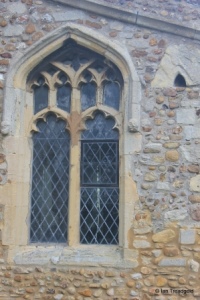 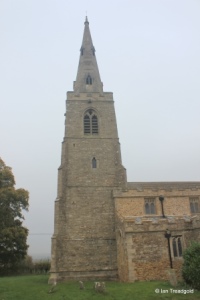 The tower is of four stages with angle buttresses to each corner with an internal stair in the south-west corner. The spire is octagonal with alternating lucarnes in two levels.

The belfry openings are of two cinquefoiled lights under a two-centred arch. 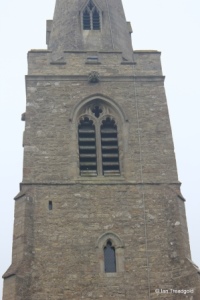 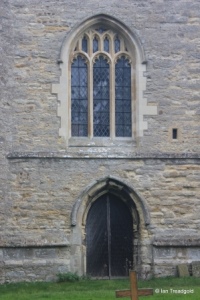 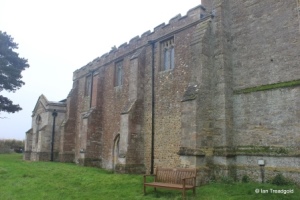 The north side of the nave has just one small window to the eastern end other than the three in the clerestory and it is of two cinquefoiled lights under a square head. The north door dates from C13. 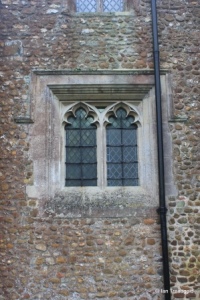 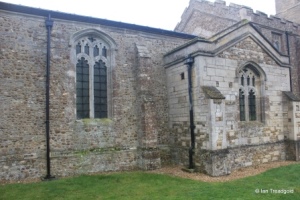 The north side of the chancel has the 1925 organ chamber to the west and a single window into the chancel itself. 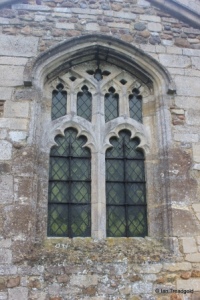 The northern window of the organ chamber is of two quite small cinquefoiled lights with perpendicular tracery above under a four-centred arch. The chancel window is of similar style and more elegantly proportioned. 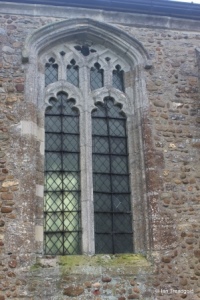 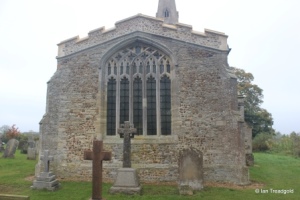 The east window dates from C15 and is of five cinquefoiled lights with perpendicular tracery above under a four-centred arch. 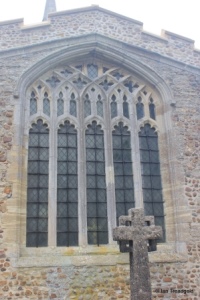 The south side of the chancel has two identical windows surrounding the priest’s door. Each is of two cinquefoiled lights with perpendicular tracery above under four-centred arches. 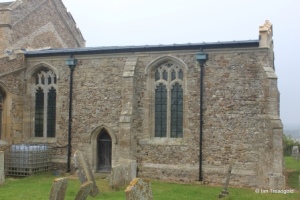