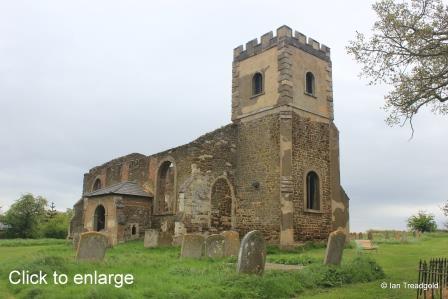 The old church of All Saints in Ridgmont is situated about half a mile to the south east of the current village. Access is via an access road from the Ridgmont to Eversholt Road. Limited parking is available by the roadside outside the church.

The church is now derelict and under the control of Bedfordshire County Council. Its history reflects that of the migration of the village of Segenhoe to the present village of Ridgmont. The historic manor of Segenhoe existed in the fields around the church with the current manor house which dates from C18 still in existence to the east of the church along with the buildings of Manor Farm built in C19.

As the current village of Ridgmont developed along the main road so the importance of Segenhoe declined. With the building of the new church in Ridgmont in 1855, the fate of the old church was sealed with it initially being retained as a mortuary chapel and then falling into decline and dereliction. The church in Rigmont has no graveyard and the graveyard of the old church is retained for that purpose.

The church itself was modernised and renovated many times in its life and it is difficult to picture its development as much has been lost and obscured by the consolidation exercise to preserve the remains. What little information there is indicates that the chancel dates from the C11 with the north arcade completed in the early C14. There alterations in early C19 which added a west tower to replace the existing timber bell-cote or tower.

In layout the church has a chancel, nave, north aisle, west tower and north porch. 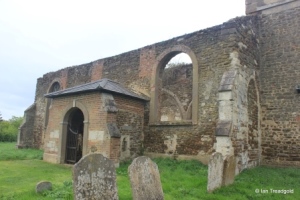 The north aisle of the church has two round arched windows surrounding the C19 predominantly brick built porch. 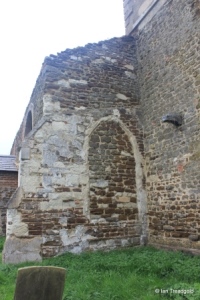 There is a blocked west window to the aisle. The windows to the north were quite large affairs giving an indication of a grand church. 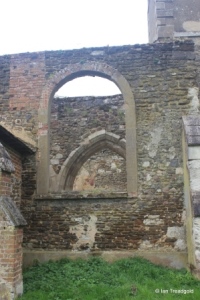 The north porch dates from restorations of 1819 and rebuilt an existing structure as can be seen by the re-use of the existing east and west walls. The new work is in the style of the restoration period with extensive brick work and concrete arch. 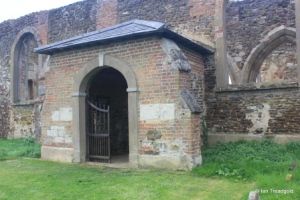 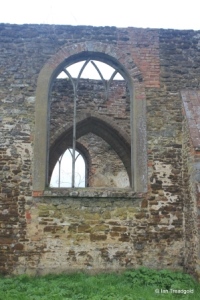 The eastern window of the north aisle retains some of the wooden tracery installed in the C19 restorations albeit looking a little precarious in this window. 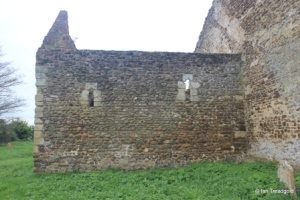 The north side of the chancel has just two small single lancet windows with a decorative lintel above the eastern. 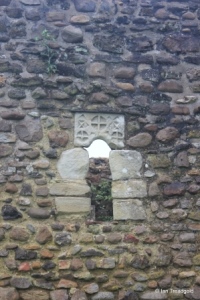 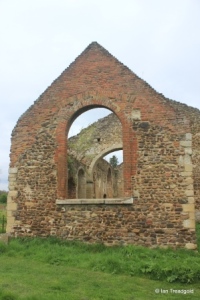 The east window shows signs of extensive restoration with the mullions replaced with brick and a relieving arch placed above the round arch.

The view from the south-east casts a sorry view of the church but highlights the roof lines of the chancel and nave showing the chancel roof as quite pointed with the nave roof extending over the aisle in a much shallower line. 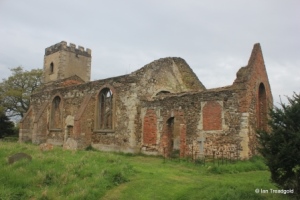 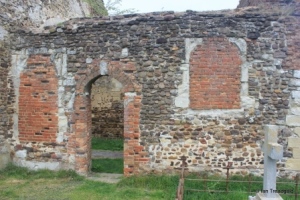 The south side of the chancel has blocked windows and a priest’s door, all works done in the C19 restorations.

The south side of the church shows two windows surrounding a blocked south doorway which was originally inside a south porch now long gone. 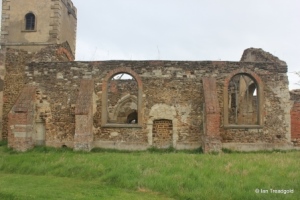 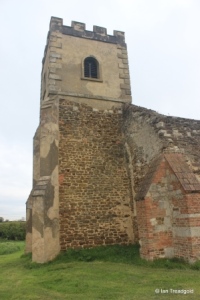 The west tower was originally topped by a wooden bell-cote before the upper part of the present tower was added in 1826 with the clear difference in styles. 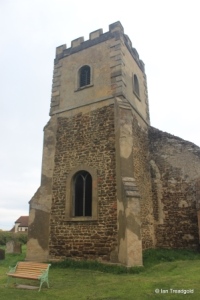 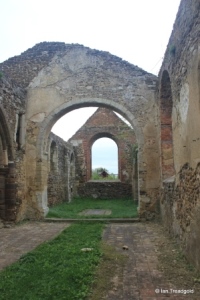 Inside, the nave retains some of its tiles and the four bay arcade of the north aisle remains. 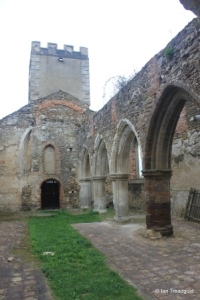 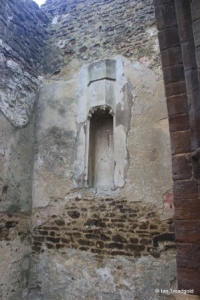 There is a statue niche in the east wall of the north aisle and the west end of the nave shows many of the architectural works that have taken place in the church with the old tower arch partly remaining before the arch was blocked and the also blocked window and doorway added presumably in the C19 restorations. 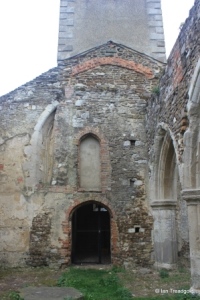