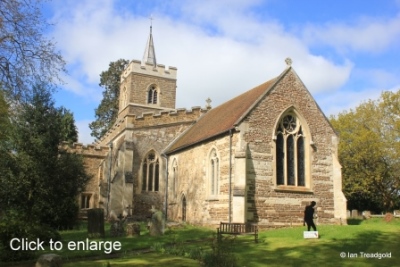 The church of St Mary in Westoning is situated towards the end of Church Road to the west of the village. Parking is available at the roadside outside the church.

The church consists of a nave, chancel, north and south aisles with a west tower, south porch and vestry to the north of the chancel. The chancel is around 31 feet by 17 feet with the nave adding around 45 feet in the same width. The aisles add some 7 feet on either side and the tower is around 9 feet by 11 feet and around 63 feet high.

Whilst there is some evidence of an earlier church dating to C12, the present building has its origins in C14 from which the nave, chancel, aisles and porch date. In C15 the tower was added and the aisles heightened with the pitch of the nave roof being reduced to its current angle. Major restoration work was undertaken in C19. The church is built of Bedfordshire ironstone with some stonework reused from the earlier building. 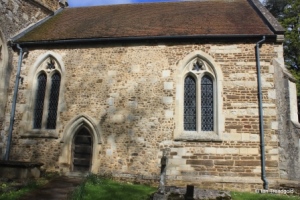 The chancel has windows to either side of the door and the chancel itself shows signs of extensive restoration, presumably during the C19 works. 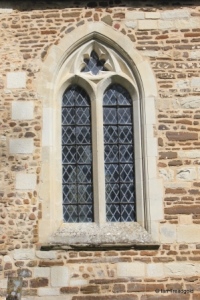 The windows are restored and are of two uncusped lights with a hexafoil design in a spherical triangle in the head under two centred arches. 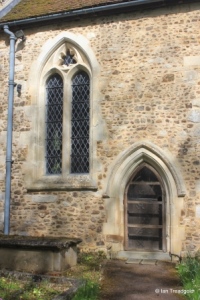 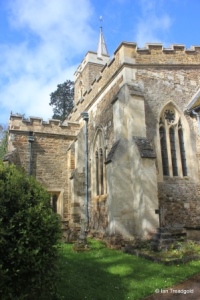 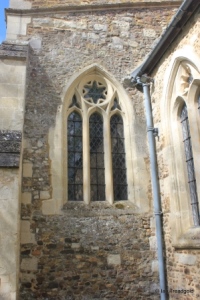 The east window is a restored C14 window with three narrow uncusped lights with an encircled sixfoil in the head. The east window is above an altar in the aisle dedicated to the patron of the church, St Mary. The is a piscina to the side of the altar. 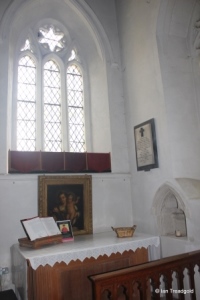 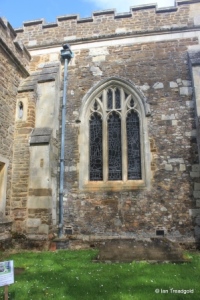 The eastern window of the south aisle is of C15 origin with three cinquefoiled lights with perpendicular tracery above under a two-centred arch. The masonry above the window showing a clear line where the aisle walls were raised in C15. The glass in the window dates from 1903 and depicts Mary and Jesus along with the inscription from Luke 10:42 – “Mary hath chosen that good part which shall not be taken away”. The glass is in memory of John Gadsby Coventry Campion and donated by this wife Jessie Coventry Campion. Revd JG Coventry Campion was lord of the Manor of Westoning and a benefactor of large parts of the village including the clock tower in the village as a memorial of the Diamond Jubilee of Queen Victoria. 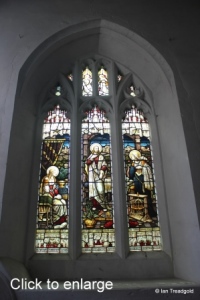 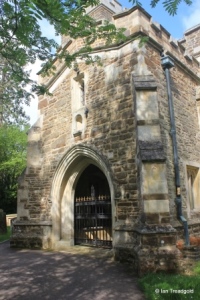 The south porch is of two storeys with a parvise over. The access to the upper floor from inside the church was reopened in 1979 after having blocked for many years. The porch is lit by two-light square headed windows to east and west and the parvise has a small single light window over a statue niche to the south. 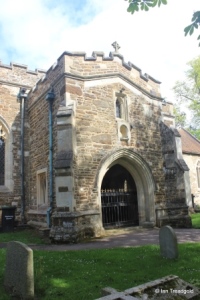 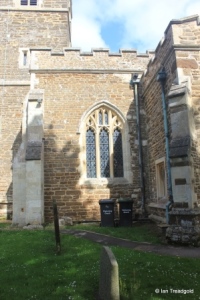 The western window in the south aisle is similar to the eastern window but with plain glass. The west window of the aisle is of three cinquefoiled lights without any tracery under a tudor arch. 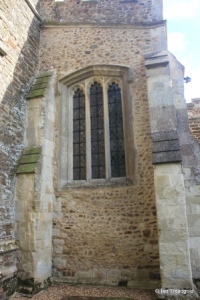 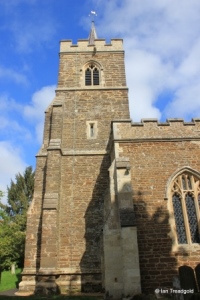 The west tower was added to the main body of the church in C15 and is of three stages with a spire on top. Like the rest of the church other than the chancel the tower has an embattled parapet. The belfry windows are of two trefoiled lights under a two-centred arch. 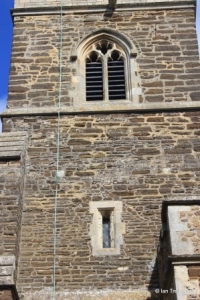 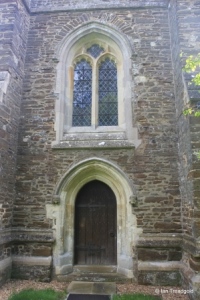 The west window is of two cinquefoiled lights under a two-centred arch with a quatrefoil design in the head. The tower has an external accessed stair in the north-east corner that was built in the C19 restorations. 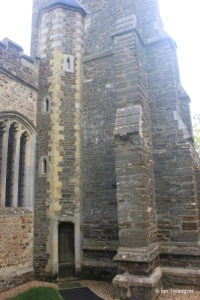 The north aisle is similar in layout to the south with windows to the east and west and further windows either side of the north door. 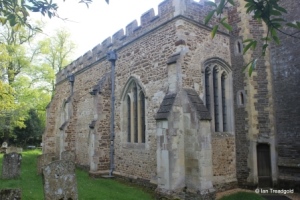 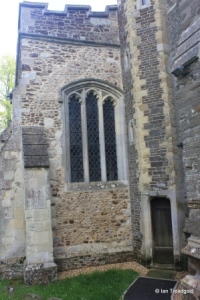 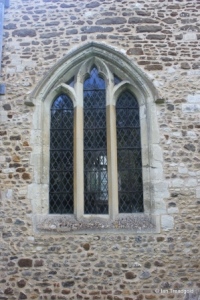 The two north facing windows in the north aisle have been restored but retain the C14 heads being of three lights of which only the centre light is trefoiled. The arches are both wide two-centred arches with no tracery under. 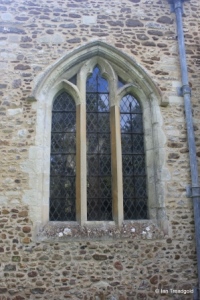 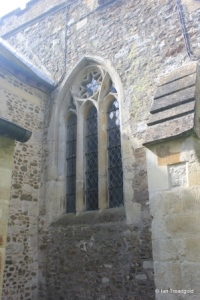 The east window of the north aisle is of the same style as that in the south aisle with three uncusped lights with an encircled sixfoil design in the head. 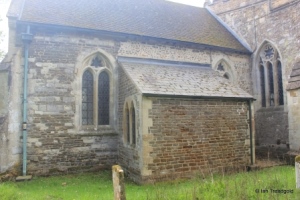 The north side of the chancel has the modern vestry wedged between the two north windows. 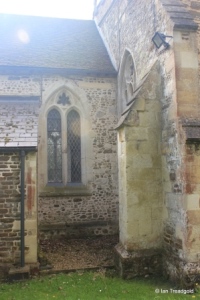 The two windows on the north side of the chancel match those on the south being of two uncusped lights with a hexafoil design in a spherical triangle in the head under two centred arches. 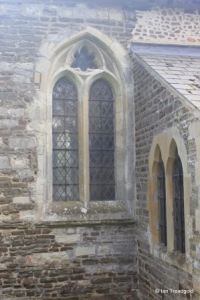 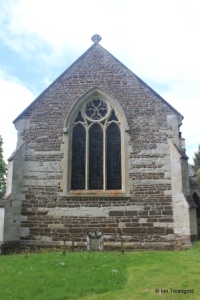 The east window dates from the C19 restorations and has three uncusped lights with extensive geometric tracery over under a two-centred arch. The glass dates from 1895 and was placed in memory of John William Coventry Campion and his wife Ann by their children John Gadsby Coventry Champion and Percy Ann Newland. It illustrates three passages from the bible; Luke XXIV 13:29, John XX 16:17 and John XXI 12:13 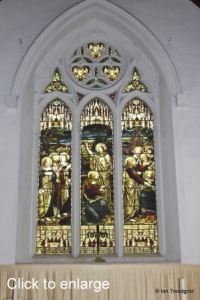 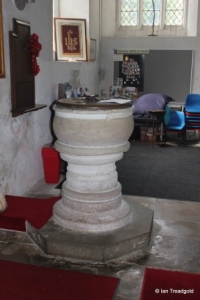 The font may date from the earlier C13 church and has a single round pedestal with a round bowl.

There is a bust of John Gadsby Coventry Champion in the north aisle. 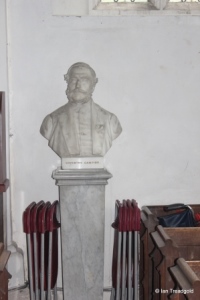